Your objective is to rescue all the hostages on a level and get them to the helicopter safely.

-> Move the character with arrow keys or WASD/ZQSD

-> Prevent the hostage from taking damage

-> Oxalotte : composed all the musics, level-design

It's pretty polished and It looks really nice.

They are a few things that could be improved though. I feel like having to spend all your movement points before doing an action is a bit annoying.

It's a bit hard to know who I'm targeting (but it's usually who I think I'm targetting so good job on that ! Just need to be a bit clearer visually).

Another little thing that might seem stupid but I feel like the doors should contrast more with the rest of the assets. I was ignoring them at first, forgetting doors where a thing :D

Anyways, very great job ! You have done an impressive work in 3 days ! They are a lot of things to be loved !  The game reminds a bit of Hotline Miami in its artstyle and the character design is really well done.

Thank you for the advices ! ^u^

Hi, thank you for your feedback =D

The movement and combat system is a bit messy at the moment, I'm thinking about improving it in new updates.

In relation to the doors : there's supposed to be an animation when you pass through, I didn't have time to implement it x) 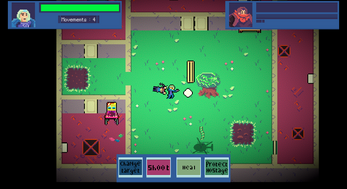 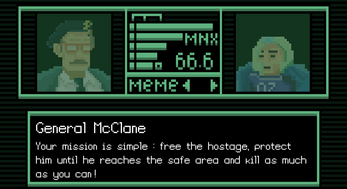 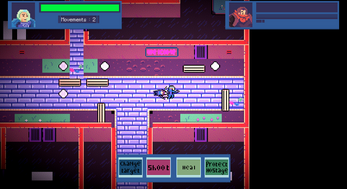